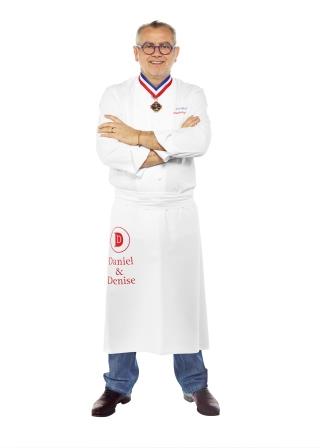 Daniel et Denise is in Lyon’s third arrondissement. Formerly a butcher’s, then a shop selling sauerkraut, the restaurant now exudes the typical atmosphere of the bouchon, with copper warming-pans, wood panelling and red-and-white checked tablecloths. Born in the Vosges but a Lyon man at heart, Joseph Viola bought the restaurant from Daniel Léron in 2004. Having served his apprenticeship under Monsieur and Madame Rémy at Restaurant Les Vallées in La Bresse, he went on to perfect his skills working in a number of Michelin-starred restaurants. The great chef’s cooking offers the perfect balance between tradition and modernity, where traditional flavours combine with unusual savours, and classic dishes from the realms of Lyon’s gastronomic history are reworked with a touch of inspiration. His foie gras and sweetbread pastry, curate’s omelet and baba au rhum are quite simply to die for, while the service, under the watchful eye of wife Françoise, is both attentive and thorough. Find this restaurant also on lyonresto.com

From Monday to Friday
from midday till 2 pm and
from 7 pm till 10 pm.