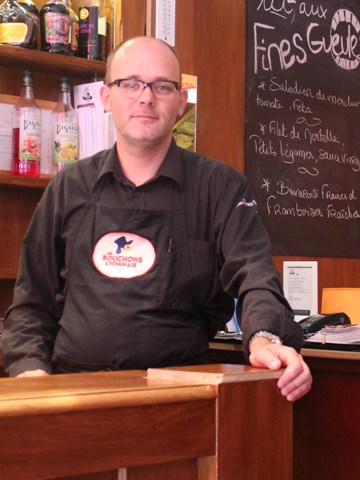 In one of the old town’s little backstreets you’ll find les Fines Gueules, a little restaurant with two dining rooms, of which the upstairs one is just right for larger groups of diners. Graffiti on the windows and walls remind us that here the cooking is sincere, the dishes not fussy or fancy. And the menu looks good, with both typical Lyon cuisine and fresh fish accompanied by seasonal produce from the market … After studying at the Chamalières School of Catering, this trained chef went on to work in Lyon, Paris and London, followed by a spell at the Paul Bocuse Institute. He then spent 11 years working with Paul Bocuse himself in Collonges as deputy manager, but in 2009, keen to put his knowledge and expertise into practice in his own restaurant and share his experience and vision of what a restaurant should be, he opened La Cantine du Palais, before devoting himself entirely to Les Fines Gueules in 2012, where he serves genuine, typical Lyon cuisine in Vieux Lyon, the city’s emblematic old town: “We peel, we bone, we simmer, we cook", it says on the mirror. "You can walk a little further, but it might not be as good", proudly proclaims a slate on the wall… Find this restaurant also on lyonresto.com