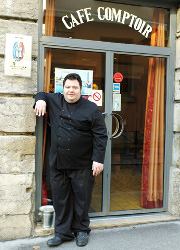 "Les Culottes Longues is an authentic Lyon bouchon, just a stone’s throw from Place Bellecour in the Ainay district, once a favourite haunt for Lyon’s antique vendors. In the midst of this rustic, friendly atmosphere, it would be hard to ignore the magnificent pair of bloomers in a frame on the wall! A wooden spiral staircase in the centre of the room leads up to the restaurant, which is on the first floor. David Cano initially came to the restaurant, which was founded by François Paillet in 1995, as a commis chef, subsequently moving his way up to becoming head chef in 2005, at which point he decided to buy the bouchon himself. A passionate protagonist of Lyon culinary tradition, he is always trying out new ideas in order to improve and extend his expertise. His salade lyonnaise, saucisson and calf’s liver are simply irresistible. Renowned for its good food, the bouchon’s bywords are terroir, season and region, and the atmosphere is traditional and warmly welcoming. Find this restaurant also on lyonresto.com

From Tuesday to Saturday
from midday am till 3 pm and
from 8 pm till 11 pm.