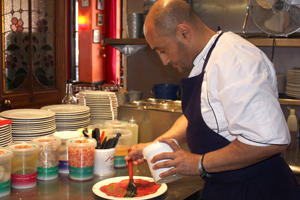 This is the story of Anne Toiron, who fell so much in love with a bouchon called Les Lyonnais that she just had to buy it …

Les Bouchons Lyonnais : Can you tell us the names of your chefs and the career paths they followed?
Anne Toiron : We have had a succession of chefs here in this wonderful establishment.

LBL : Why did you decide to open a bouchon-style restaurant (generation, family, etc.)?
AT : When I acquired the restaurant it had already been one of Lyon’s bouchons for a long time, so I just kept it that way.

LBL : Does your bouchon have any specialities or particular culinary style?
AT : My specialities are calf’s head, pot-roasted veal kidneys, chitterling sausage (andouillette) and hand-made quenelles.

LBL : What dish would you choose to symbolise bouchon cuisine?
AT : I’d sum it up in one word – quenelles!

“The Lyon’s gastronomy is simple, traditional with no frills.”

LBL : How would you describe Lyon’s gastronomic heritage?
AT : Simple and traditional, with no frills.

LBL : Apart from the actual cooking, what else is different about genuine Lyon bouchons as opposed to other restaurants?
AT : The tables should be close together and there should be a friendly atmosphere.

LBL : What would you say are the qualities of a good restaurant owner?
AT : They have to really know their produce, manage their team well, and like their customers.

a cooking utensil : a spatula.

an item of crockery or cutlery : a spoon.