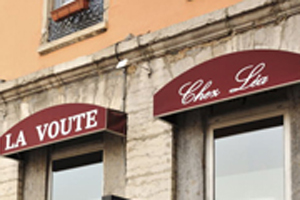 True bourgeois cuisine from Lyon has been celebrated at La Voute Chez Léa since 1943. In these warmly welcoming surroundings so typical of Lyon, you will be able to try regional specialities that change naturally with the seasons, while in the autumn you can also enjoy game or one of the great French classic dishes. Located right in the heart of the Presqu’île, the establishment also offers private rooms and a counter-service café.

Les Bouchons Lyonnais : Can you tell us the names of your chefs and the career paths they followed?
Christian Têtedoie, MAF (France’s Best Apprentice) in 1979 and MOF (France’s Best Artisan) in 1996, served his apprenticeship under Mr Delphin in Nantes, learned his trade at Restaurant Greuze in Tournus and with Roger Vergé, then worked as a chef for Georges Blanc.

LBL : Why did you decide to open a bouchon-style restaurant (generation, family, etc.)?
To safeguard Lyon’s tradition of local cuisine made with local produce

LBL : What dish would you choose to symbolise bouchon cuisine?
The finely sliced tripe

“A good restaurant owner uses quality produce, that changes with the seasons”

LBL : How would you describe Lyon’s gastronomic cuisine?
The pleasures of traditional bourgeois cooking

LBL : Apart from the actual cooking, what else is different about genuine Lyon bouchons as opposed to other restaurants?
The decor, the atmosphere, and the authenticity of the food

LBL : What would you say are the qualities of a good restaurant owner?
Dishes made using only fresh, quality produce, that changes with the seasons

a cooking utensil? : a stewpot

an item of cutlery? : a spoon