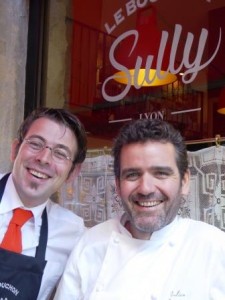 The latest member of the Bouchon Lyonnais family – and it all began when someone from Lyon teamed up with someone from the Beaujolais area !

Les Bouchons Lyonnais : Can you tell us the names of your chefs and the career paths they followed ?
Julien Gautier : I am both the chef and the owner of the M Restaurant next to the Bouchon Sully. I asked Taro Iwakoshi to be the chef at the Bouchon Sully – I worked with him for 2 years at the M Restaurant. Taro is from Japan but he trained at the Institut Paul Bocuse. We work together on drafting the menus and choosing the products and suppliers. Taro uses his Japanese meticulousness to express Lyon’s gastronomic tradition!

LBL : Why did you decide to open a bouchon-style restaurant (generation, family, etc.) ?
JG : I was born and bred in Lyon. I’m a big fan of pork in all its forms and bourgeois cuisine! It’s a type of cooking I know really well because I worked as a chef at ‘Léon de Lyon’ with J.P. Lacombe for 4 years. The idea of having a bouchon also came up when I was talking to Emmanuel Tachon-Foley, the Maître d’ at the M Restaurant – he’s from the Beaujolais area. We’ve been working together since 2008 and we decided to open the Bouchon Sully together.

LBL : Does your bouchon have any specialities or a particular culinary style ?
JG : We have all the great classic dishes of both Lyon cuisine and traditional French cooking. Starters like ‘salade de museau’ (a type of brawn), pickled herrings with potato salad, or ‘pâté en croûte’ (pâté wrapped in pastry). Our mains include quenelles, vol au vent and calf’s liver, which are always on the menu. We always have dishes based on andouillette (chitterling sausage) and Bresse chicken, such as chicken suprême with crayfish sauce. Having a weekly set menu means we can make a few variations and serve some more traditional dishes like tripe with tomato or lighter ones using fish. Our desserts include the great classics like floating island with pralines, rum baba, café liégeois, and so on… the customers love them!

LBL : What dish would you choose to symbolise bouchon cuisine ?
JG : Now that’s a very good question! First and foremost it has to be generous and appetising – something like andouillette (chitterling sausage) or quenelles.

LBL : How would you describe Lyon’s gastronomic cuisine ?
JG : It’s generous, copious and friendly, and made with local produce.

LBL : Apart from the actual cooking, what else is different about genuine Lyon bouchons as opposed to other restaurants ?
JG : The setting, the warm, friendly atmosphere. When you go to a bouchon, you should feel at home, relaxed and able to talk loudly if you want to!

LBL : What would you say are the qualities of a good restaurant owner ?
JG :They should be generous, consistent in the kitchen and front of house, and prepared to listen to their customers. They should be able to innovate too!

a typical Lyon dish?
Something made from pork, obviously!

a cooking utensil?
A gratin dish

an item of cutlery?
A soup spoon