The dishes are very simple and prepared on site. The Bouchons use quality local produce for their cuisine.

Yes, Bouchons are synonymous with proximity: they use fresh produce which usually comes from the Lyon covered market, the Corbas National Interest Market and local markets such as the Quai Saint Antoine and Croix-Rousse markets.

In other words, this is not the place for “An exquisite Surprise mist on a delicate cream soup” but a beautiful plate of cardoons grown in the fields!!

In keeping with tradition, all meals are accompanied by the famous pot lyonnais (carafe) of Beaujolais, Côtes du Rhône… Even the mâchon: a traditional early morning meal consisting of pork products or tripe originally prepared by the owner of the bouchon. This tradition comes from the Canuts (silk weavers) who ate at dawn after working through the night.

A meal in a bouchon always starts with an aperitif consisting of a communard (kir with red wine) and grattons: pork scratchings seasoned with salt, pepper and vinegar.

Quenelle, from the German knödel, is the epitome of Lyon cuisine. These dumplings consist of fresh moist breadcrumbs, veal fat and poultry (or fish) meat, minced and arranged in the form of a sausage.

The tablier de sapeur (fireman’s apron) is another typical dish, based on flat tripe and deriving its name from the Maréchal de Castellane, governor of Lyon, who discovered this recipe in Spain under Napoleon III. He used to wear a leather apron, hence the name of the dish.

The cervelle de canut (or claqueret) is a fairly firm type of cottage cheese, beaten and seasoned with salt, pepper, vinegar, oil, fresh herbs and garlic. Its name refers to silk workers.

The Mothers were used to preparing simple and traditional desserts for bourgeois families (apple tart, île flottante, rum baba). Praline tart appeared much later, even though praline originated in Lyon.

– salt and pepper to taste

Put all the ingredients in a mixing bowl and beat well together. Serve chilled but not too cold, as a dip for raw vegetables, with baked potatoes, or simply as the cheese course.

Melt half the lard in a deep frying pan and soften the onions in it for 5 mins. Stir in the thin strips of tripe. Cook gently for about 15 minutes. Add the remaining 125g of lard, and season with salt and pepper. As the mixture is cooking, add 15cl of dry white wine. When the tripe is golden brown, pour off the excess lard and sauté the tripe, then deglaze with the vinegar. Stir in the chopped parsley just before serving.

Cut the sausage into 6 round slices. Heat the oil and butter in a Le Creuset style cast-iron pan and brown the sausage slices. Mix the white wine, mustard and crème fraîche together in a bowl. 2 or 3 minutes before serving, add the mixture to the slices of sausage. Reduce until sauce thickens slightly. Sprinkle with parsley just before serving.

Bake the pastry-case blind.
Put pralines and cream in a saucepan and allow to melt, then simmer until the mixture forms a ribbon when allowed to drop from the spoon. Pour into the pastry-case and leave to set before serving. 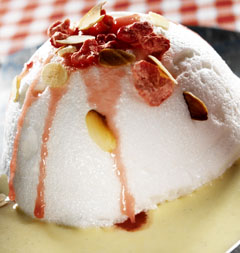 When the Mothers were working for bourgeois familie...

they did not throw anything away, especially not offal!