The history of Lyon’s cuisine is rooted in… ancient times! At the time, Lugdunum, currently known as Lyon, was the capital of the Three Gauls. It has been at the forefront of the wine trade since the 2nd century BC. In the Middle Ages, Lyon had numerous fairs and inns, which helped build the city’s culinary reputation. During the Renaissance, bourgeois cuisine was distinguished from popular cuisine.

Cuisine has always taken pride of place in Lyon. It has also left its mark on the local speech. For example, if someone from Lyon mentions a courge, he is in fact referring to a pumpkin. A baraban is what they call a dandelion. Some typical Lyon expressions also refer to cooking. For example, feeling coufle means that you have had too much to eat. Se taper le fusil (hitting the rifle), means eating a lot.

Whether you are French or not, you will be charmed by its authenticity.

Lyon’s cuisine has managed to preserve its traditions while adding a touch of modernity. Lyon’s gastronomy is constantly reinventing itself thanks to young chefs (such as the Mère Brazier or Léon de Lyon restaurants) and prestigious training schools (Paul Bocuse and Vatel institutes).

The city also boasts many top star-studded chefs : Paul Bocuse and his restaurant L’Auberge or David Tissot in the Villa Florentine. 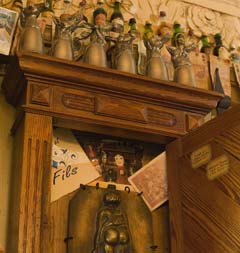 the wife of King Henri IV, introduced Italian cuisine to the Lyonnais.