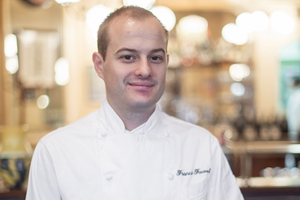 Aux Lyonnais is a Paris bouchon serving Lyon cuisine, which has been run by Alain Ducasse since 2002. The top quality, traditional restaurant has been nurturing its warm, relaxed welcome since 1890.

Les Bouchons Lyonnais : Can you tell us the names of your chefs and the career paths they followed?
Alain DUCASSE : In 2002 Alain Ducasse took over Aux Lyonnais, a restaurant that he was particularly fond of. I was delighted to join the team in August 2013 as chef. I’d previously worked under Jean-Louis Nomicos, Alain Dutournier, and Pascal Bardet, and was at the Le Louis XV-Alain Ducasse restaurant in Monaco for 5 years.

LBL : Why did you decide to open a bouchon-style restaurant (generation, family, etc.)?
AD : I love traditional Lyon cuisine because it’s friendly, generous and festive. I respect its traditions and flavour combinations, but I also like to modernise it slightly to make it lighter and even tastier.

LBL : Does your bouchon have any specialities or particular culinary style?
AD : Coddled egg with crayfish, the Lyonnaise chef’s pot – shredded suckling pig and foie gras, Lyon quenelles with Nantua sauce, calf’s liver with parsley, garlic and tender potatoes, and for desserts, praline tart and floating islands. They’re all dishes that only work with the freshest possible ingredients.

LBL : What dish would you choose to symbolise bouchon cuisine?
AD : Lyon quenelles with Nantua sauce. I follow Lucien Tendret’s recipe, which only uses flour. They are puffy, lightly browned and really creamy. Served with a real Nantua sauce made with crayfish butter, I think it’s a dish that symbolises Lyon bouchons perfectly.

LBL : How would you describe Lyon’s gastronomic cuisine?
AD : It’s appetising, gourmet cuisine that really shows off the quality of local produce.

LBL : Apart from the actual cooking, what else is different about genuine Lyon bouchons as opposed to other restaurants?
AD : It’s the atmosphere. Aux Lyonnais dates back to 1890 and has kept its red wooden frontage and zinc and pewter topped wooden counter. Wooden panelling, flowered plaster mouldings, retro light fixtures and metro style tiles decorate walls and ceilings. There are steel-framed oak tables, with white plates and napkins, mismatched silver cutlery, traditional water glasses and bistrot-style wine glasses…It’s a place with a soul, a personality that’s quite unique.

LBL : What would you say are the qualities of a good restaurant owner?
AD : We need to look after our customers’ well-being, and give them a warm, natural welcome, so that the friendly atmosphere of the Lyon-style bouchon makes them want to come back again and again.

a typical Lyon dessert? : marjolaine, because I love chocolate and praliné!

a cooking utensil? : a frying pan because you can do anything with them

an item of cutlery? : a knife